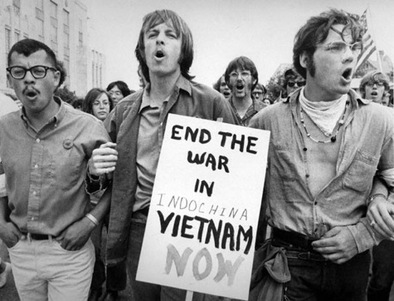 On the weekend of August 15, 16 and 17, 1969, over 500,000 people from all over the U.S. traveled to Woodstock, in upstate New York, for what would become the most famous music festival ever. Woodstock was a stridently antiwar spectacles, but its message was diluted by the media. Rather than focus on the political statements made, mainstream cultural commentators talked about hippies, long hair, and nudity. Woodstock signaled the merger and ambivalence of the counterculture and protest. The festival was billed as "three days of peace and love," in contrast to the war and hatred in Vietnam. 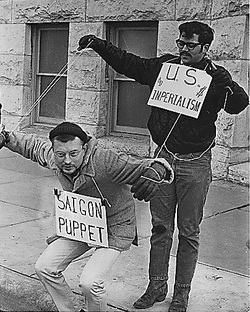 The Vietnam war started as a result of U.S strategy of containment during the Cold War, which aimed to prevent the spread of communism throughout the world.From 1950, the United States started to support South Korea in their battle against the Communist North which was backed by China and the USSR.Vietnam was essentially a French colony until 1954 when they signed a treaty at Geneva conference, which temporarily separated the North communists from the south anti-communists, after the Battle of Dien Bien Phu.  When the French lost control in Vietnam was about the time the Korean war ended which had left the country partitioned into North and South Korea with China and USSR actively supporting the North communist government. Then U.S President Eisenhower regarded Vietnam as Korea all over again and feared the whole Southeast Asia including Laos, Cambodia, Thailand would fall to communism in a domino effect as similar as what had happened in Eastern Europe. The loss of that essential regional trading area would encourage Taiwan, Japan, Australia and New Zealand to compromise politically with communism. Therefore, the U.S intervened in Vietnam trying to keep the South Vietnamese “domino” from falling. 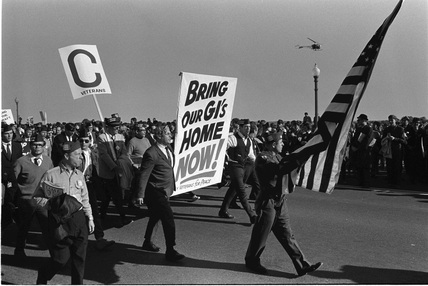 The war was being sold to the U.S public as one where a sophisticated and extremely wealthy super-power would have few to no problems defeating a Third World nation that North Vietnam seemed to repress. The protests against the war started to pick up when body bags started to return to America in increasing numbers. The U.S Government had told the US public that victory was guaranteed when in reality it was taking many young lives. In May 1968, 562 U.S troops were killed in one week. Coupled with these casualty figures were stories that eventually came out about atrocities committed by U.S troops against the people they were trying to "save". The most infamous was the My Lai massacre. This event actually highlighted to the U.S public the enormous strain frontline troops were experiencing on a daily basis against a supposedly inferior enemy with and supposedly inferior war strategy. 1968 seems to be the key year for protests. To some, especially the young, America was not only sacrificing their male youth but the government was also sanctioning the death of children not only in South Vietnam but also in the North with the blanket bombing raids that were occurring on almost a daily basis. 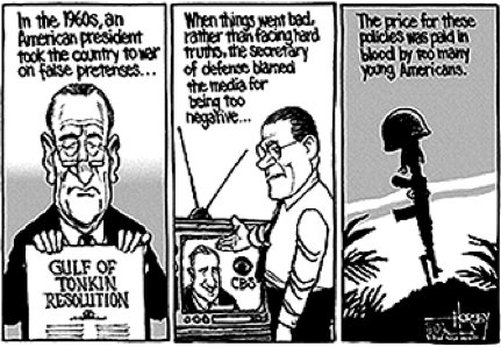 At a news conference, President Nixon says that the Vietnam War is coming to a "conclusion as a result of the plan that we have instituted." Under the provisions of this program, South Vietnamese forces would take more responsibility for the war, as the south Vietnamese forces become more capable the U.S troops would be extracted from Vietnam. In his speech, Nixon pointed out that he had already ordered the withdrawl of 60,000 U.S troops. He had also issued orders to provide South Vietnamese troops with more modern equipment and weapons and increased the advisory effort, all apart of his "magnificent" plan of Vietnamization.
Powered by